Recent news about bond market rout and the resulting rising yields across the globe and especially in the US caught many by surprise. Investors fear that assets which are sensitive to rising rates in the US could have a hard time. However the fears appear baseless if we taken into consideration the reason for the spike in the bond yields. 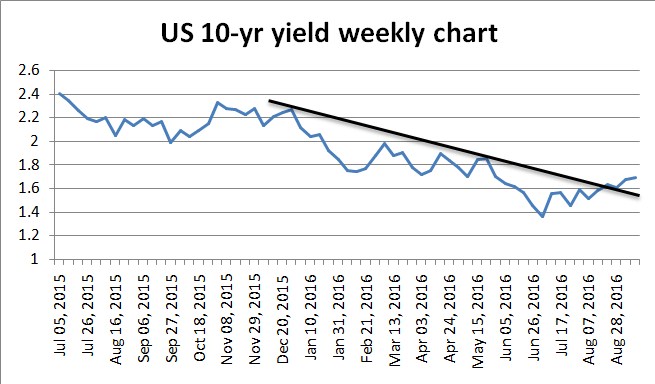 Central banks, most importantly BOJ, ECB, SNB, stand exhausted. It is important to note that sharp decline in the bond yields (rise in prices) in the post GFC world is largely due to QE programs initiated by major central banks across the globe. Now that the banks appear to have run out of steam, the long duration yields on the rise.

Since the end of 2012, it is the Bank of Japan which has been driving the JGB yields lower and forcing other central banks to ease. ECB has been the major victim of BOJ’s stimulus and thus had to come out in retaliation with its own QE, negative rates etc. So it can be concluded that it was BOJ which drove yields lower across the globe.

However, BOJ is now looking to steepen its yield curve (push up the long duration bond yields) in order to support banks and pension funds suffering due to negative rates. Furthermore, there are concerns about bond market liquidity, which too is forcing BOJ to consider steepening the yield curve. Given that it was BOJ which lead the way lower, it is safe to assume the steepening of the yield curve is being led by BOJ as well. So it is quite clear that the steepening of the yield curve is due to central bank exhaustion, thus there is little reason to worry about a gold sell-off due to rising bond yields. Moreover, central bank exhaustion is actually a sign of worry and could add to safe haven appeal of the yellow metal.

Another point worth noting is that central bank exhaustion would eventually force governments to come up with fiscal stimulus. No wonder, there are growing calls for fiscal spending across the advanced world. This is supportive for gold because fiscal spending is more efficient in pushing up inflation than monetary effort.

The side effect of central bank easing over the last few years and the falling bond yields has been an unprecedented stock market rally. Consequently, central bank exhaustion and the resulting rise in the yields could hurt gold, thus increasing the hedging/haven demand for gold.

This Week in Forex – The Journey Ahead

This Week in Forex Trading: Yen in Trouble?

How to use Pivot Points In Intraday Trading?...

Everything you need to know about Candlestick Patterns...

Is Forex Trading Profitable Today: How to Trade...