SMA is not WMA

SMA or simple moving average in many ways differs from the weighted moving average. Being able to apply both under the right circumstances can mean all the difference between boom and bust. In order to achieve this, it is imperative to delve deeper into the nature of both technical analysis tools and discover how they work.

SMA or WMA: simple or otherwise

For example, let’s use both SMA and WMA to analyze a set of closing values for a currency pair over a five-day 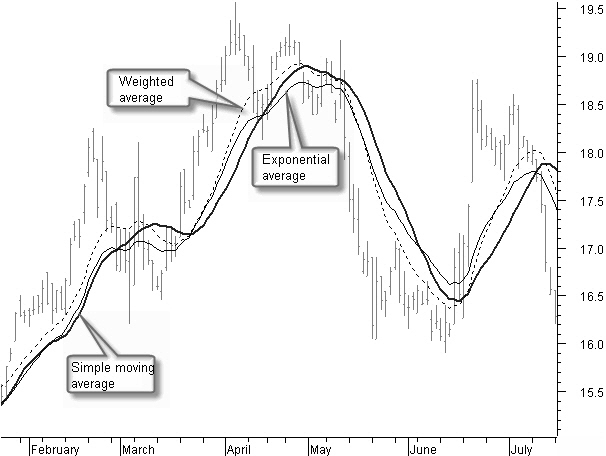 The results of SMA and WMA are off by 0.011. It may not seem like much, but even a discrepancy this minute could mean the difference between a downward and an upward trend, or at least a difference in momentum. It proves mathematically that SMA and WMA are not the same thing. By themselves, neither of them mean much, but in Forex markets, where fortunes are made and lost on a few pips, every single pip matters. And these are off by 11 pips. So, which one do you rely on? The worst part is that any of them could be off; heck, both of them, for all you know. Only time will tell. While Forex trading is not (quite) an exact science, if both SMA and WMA are rarely both wrong. This is why you should never rely on just one type of technical analysis. Try to diversify and play it safe, whenever you can.

An exhaustive study is available in the following link and the support team of your online broker can help you to understand it as well.

Apart from simple and weighted moving average, EMA or exponential moving average is among crucial factors influencing trade in Forex and other financial markets. With moving average in general being the most widely used tool for technical analysis, it is important to discern the different types and their importance, hence the topic at hand.

What is exponential moving average?

Well, like simple moving average, EMA is calculated using the sum of closing price figures over a number of periods and then divided by the number of said periods. The reason for this similarity is in the title “moving average”, and this is how (moving) average is calculated. However, this is where the “exponential” part comes into play. Unlike simple moving average, exponential moving average shifts the focus toward more recent results, rather than treating them equally. Basically, it means the last few periods are more important than the first few periods (or any periods in between), as the former spearhead the direction of the trend as well as the trend itself. The weight of data shifts as they grow older and new data come in, a process which happens exponentially – hence, the term exponential moving average.

Why is it important?

Before modern computers were developed, simple moving average was the norm when analyzing things such as trends in financial markets. They were easy and straightforward, but they had flaws. Exponential moving average, among others, was a way to correct some of those flaws. Since the main point is to predict the future, rather than statistically describe the past, it stands to reason that recent results should carry more weight than the others. Thus, EMA came into play. It can predict future development with greater certainty than the simple moving average.

What makes exponential moving average so different from simple moving average is the mathematical formula used to calculate it. Without going into the grueling details, suffice to say each entry gets assigned with a weight index in terms of percentage: the latest entry gets, say, 18%, the previous one gets 15%, and so on while the first one (chronologically) gets, say 3%. The percentage amount never reaches 100% as the data flow is perceived to be indefinite. However, by assigning these percentages to respective entries, we get a result that may differ from the one from simple moving average, which treats all entries equally.

While there is no objective way to determine which moving average is more effective, or better (“better” being a subjective term in itself), this issue generally comes down to people who prefer simplicity and people who consider new and complex things are superior in the long run. The compromise would be to use all three types of moving averages: simple, weighted and exponential and look for matches: after all, if all three point to the same conclusion, surely it is more reliable than any individual moving average. But then again, it all depends on you.