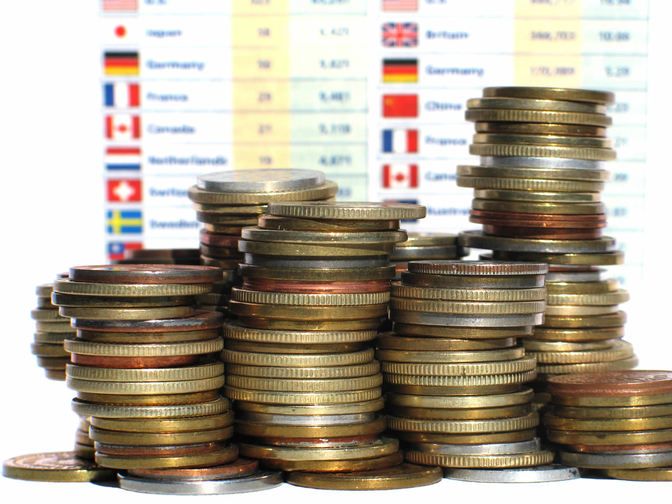 Have you ever wondered how currency works? Not just on a philosophical scale or anything as deep as that, but really – how currency works? Because, for a forex trader, this is less of a philosophical issue and more of a practical one, as they kind of need to know these things to make a decent living for themselves. Knowing what is behind a currency and what makes it ‘tick’ may not win you any trades in the long run, but without this understanding, you won’t be making any decent trades, either. Well, the short answer would be that currency works by being exchanged for various goods and services, replacing simple bartering system mankind had been practicing for millennia, and some people still do, albeit in less developed regions and hippy communes. The rest of us prefer to pay for stuff instead. But on forex market, currency works in a slightly different way. Whereas people on regular markets sell all kinds of stuff from farm produce to stocks in exchange for money, when it comes to forex markets, people buy and sell money itself, usually in bulk. But how do you make money on money itself? Three words: foreign exchange rate.

Currency exchange rates are a thing for just about anyone, but for forex traders, they are the source of income – and problems – that never dries out. Once upon a time, banks, corporations and all sorts of major players would meet up to exchange money between themselves, for a ‘modest’ fee. It didn’t take long for people to realize that their ideas of ‘modest’ didn’t match those of major banks, so they jumped in at the opportunity to get in on the action for themselves. Add the computers and all the modern gadgets and you get the forex market as we know it.

In reality, forex exchange rates essentially come down to the price of one currency, expressed in another currency – we would call this a forex pair. The most popular pair is definitely the EUR/USD pair, so we will stick to that in order to provide an example. If the EUR/USD is valued at 1.2014, it means you would get 1.2014 dollars for a single Euro and vice versa. So, if you exchange dollars into Euros and wait for the pair to rise to, say, 1.3014, then you can change the Euros back into the U.S. currency and end up with more dollars than you had before the currency exchange rates did their thing. Naturally, there are also other things you will need to factor in, and in reality you will be making cents on a single dollar, so you would need to trade big, but in the end, forex rates are the ones to decide whether you win or lose. With a few exceptions, most forex rates feature a decimal with four digits after it, and the fourth and the smallest one is called a ‘pip’. Most changes in the online exchange rate are measured in a couple of pips, so if a trader wants to profit for real, it is recommendable to trade with tens of thousands of units of a given currency.

How is Currency Valued? Currency Depreciation and Currency Appreciation.

Currency appreciation and depreciation are directly linked to the market forces and whether the exchange rate system is floating or fixed. If the former is the case, then there is little interference from the central bank behind said currency, but if the rate is fixed, then there will have to be interventions from time to time in order to maintain their current fiscal policy, as this is how currency works.

Depreciation happens for a myriad of possible reasons: perhaps the government is unstable, or they are trying to deal with some sort of problem in the economy, or they are simply trying to boost their export rates. In general, currency depreciation is associated with countries which have poor economic performance and high inflation rates. The governments of these countries are losing grip on the value of their respective currencies and the market is simply responding. However, this is not always the case. Some countries depreciate their currencies deliberately, as this will cripple sales of import goods while stimulating export. Local materials, labor and costs will drop from an outsider’s perspective, making these economies a potential honey trap for the investors. Then again, some of them are reluctant to remain in a country whose currency is losing value on a rapid scale, in fear of potential political instability that may ensue, as well as their portfolios losing a portion of their value.

On the other hand, currency appreciation can be just as linked to the monetary policy of the country behind the currency as well as the deflation rates. The latest example of a country deliberately deflating their currency, causing currency appreciation was Switzerland a few years back. While their economy adapted and exports dropped to an extent, while it became easier to afford imported goods. But what happens when a nation’s currency depreciates?

Currency depreciation is far more common these days and in general, mostly due to various governments’ inability to maintain a strong monetary policy and inflation rates getting out of control. The less common example of a controlled currency depreciation is what Bank of Canada did in 2014, weakening their currency against the U.S. dollar by a tenth. In some rare instances, there are bouts between countries trying to outperform one another by depreciating their currencies in order to boost economic performance, triggering currency wars fought on the fields of forex.

However, it is far more common for a third world country to print more money than their economy can back and it ends up losing a serious chunk of its value – this is how currency works, after all. If left unchecked, it could escalate to hyperinflation, where it would amount to a humanitarian disaster for the people involved, not to mention the damage to the reputation the country would suffer as a result. The three most extreme cases are Yugoslavia in the ’90s and Zimbabwe and Argentina in the early 2000’s, with inflation rates reaching absurd numbers and banknotes of billions and trillions that are not worth the paper they were printed on.

It is important to differentiate currency devaluation from currency depreciation. While both come down to the same thing, with currency in question losing some of its value, to equate these two would be completely absurd.

For one, currency devaluation is deliberate and planned – and hopefully controlled – for a specific economical goal, whereas depreciation simply happens for reasons that are often out of control of the respective central banks and institutions. Also, depreciation is usually something that happens to countries that either do not have a fixed exchange system or they do but are no longer able to maintain it.

So devaluation and revaluation are directly controlled by appropriate institutions under the supervision of the local government, whereas appreciation and depreciation are largely left to the market itself to regulate as market forces see fit. This does not mean that free and floating exchange rates are absolutes, of course, as no country is able to maintain a fixed exchange rate against all odds and indefinitely. Likewise, no country would sit idly and not intervene to save their currency in the most extreme of circumstances.

As for why a country decides to willingly deprive their citizens of  their purchasing power, the reason has mostly to do with trade imbalances and trying to stimulate domestic production rather than relying on imported goods. If a currency devaluates significantly, the export could skyrocket and trigger an economic expansion of incredible proportions. Then again, if the main reason behind this is to shield incompetent industrials from outside competition, this could prove detrimental in the long run.

Which Currency is the Strongest? What Does This Mean to a Forex Trader?

One good thing about forex is that it does not rely on strong and weak currencies per se, as any currency that is currently strong can quickly plummet and vice versa. Even the strongest currency in the world can fall. If you don’t believe this, ask George Soros about that one time he brought Bank of England to their knees in a single afternoon. And British pound was considered one of the strongest currencies in the world –certainly the highest currency in the world at one point. Considering recent events, however, it remains to be seen just how well will it fare in the long run. Still, most forex traders find it beneficial to pair strong currencies and the weak ones, as it makes things slightly more predictable. Did we mention there is no such thing as cheating in forex, either? Well, the way forex works, the assumption is that one currency in the pair will outperform the other, and it is the difference in their value that traders profit on. You go long on one currency and short on the other, simultaneously, so knowing which one is going to do better than the other can really make things easier.

And since the value of a country’s currency rarely changes in a rapid rate, usually a few pips a day at best, then relying on reports and analysis is usually a good way to determine which currencies are doing well, and which are not. The more positive things there are about an economy, the stronger its currency is going to get and vice versa. In the end, it all comes down to making the right choice at the right time and hoping nothing ruins your plans.

Apart from knowing how currency works, a forex trader would need an assortment of other useful tools and links to increase their odds and make things work.

Rather than keep tabs on currency exchange rates, relying on a currency converter might be of use; the link is below. At least understanding exchange rates will be out of the way…

But then again, just knowing how currency is valued and how currency works is not always enough; knowledge is power, so staying informed is essential for a forex trader. Bloomberg is a solid source of information on financial matters, so their link is below: