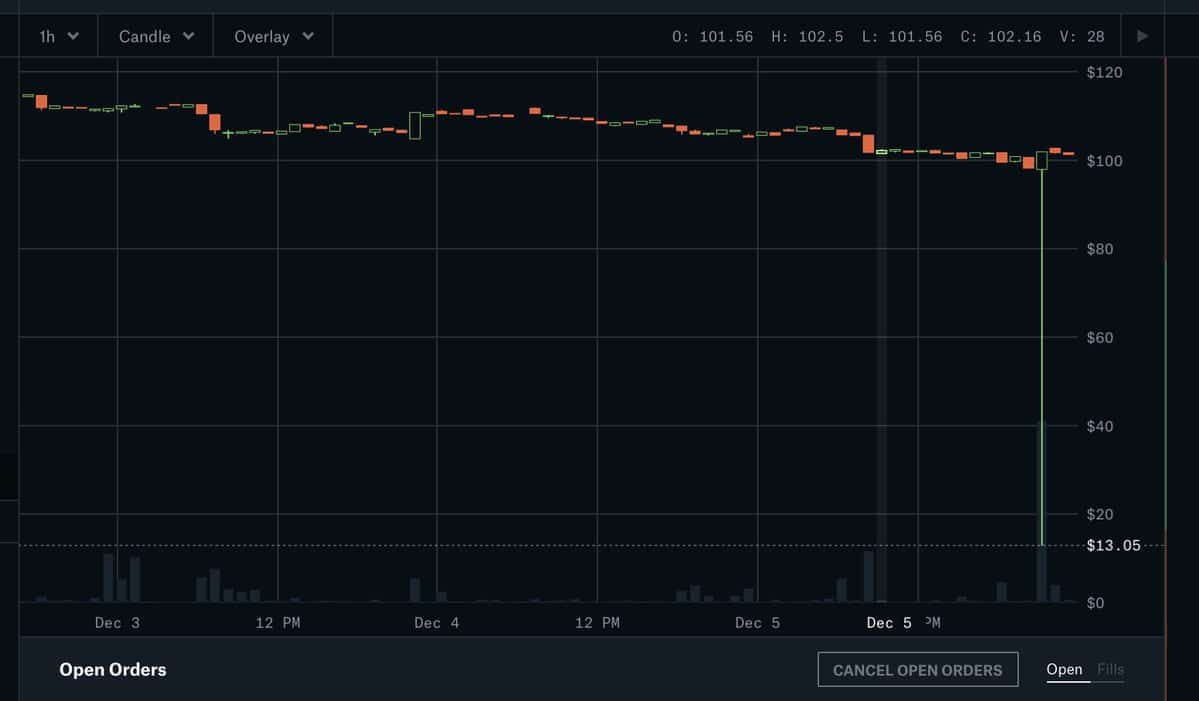 All of this has happened before, and will happen again – every single experienced crypto-enthusiast out there probably thinks of this quote from either Peter Par or Battlestar Galactica each time a sudden drop in the price of a top cryptocurrency happens, just like it did on December 6th. On said date, around 6 AM UTC, a yet unexplained blip occurred, plunging the price of Ethereum from $100 to $13 for just a few seconds before arbitrage makers corrected the price back.

Although this was not a global event, but instead only an anomaly that took place on Coinbase Pro and affected the ETH/USDC trading pair, it still caused quite a stir and meant enormous immediate profits of up to 770% for those lucky enough or smart enough having placed low orders.

Later that evening, Coinbase addressed the issue on Twitter, stating that “over the past 24 hours, all Coinbase platforms had operated as planned”. No further statements have been issued since and the matter is currently considered resolved.

The simplest solution tends to be the correct one – although not an irrefutable logical doctrine, this principle can be helpful in most non-scientific occasions, and regarding this incident, it offers a straightforward explanation. Apparently, some poor soul probably forgot to add a zero in the process of making a sell order, and the market responded swiftly, without hesitation and without mercy.

This, however, is not the first time such weird events took place – the previous occurrence was way more extreme. 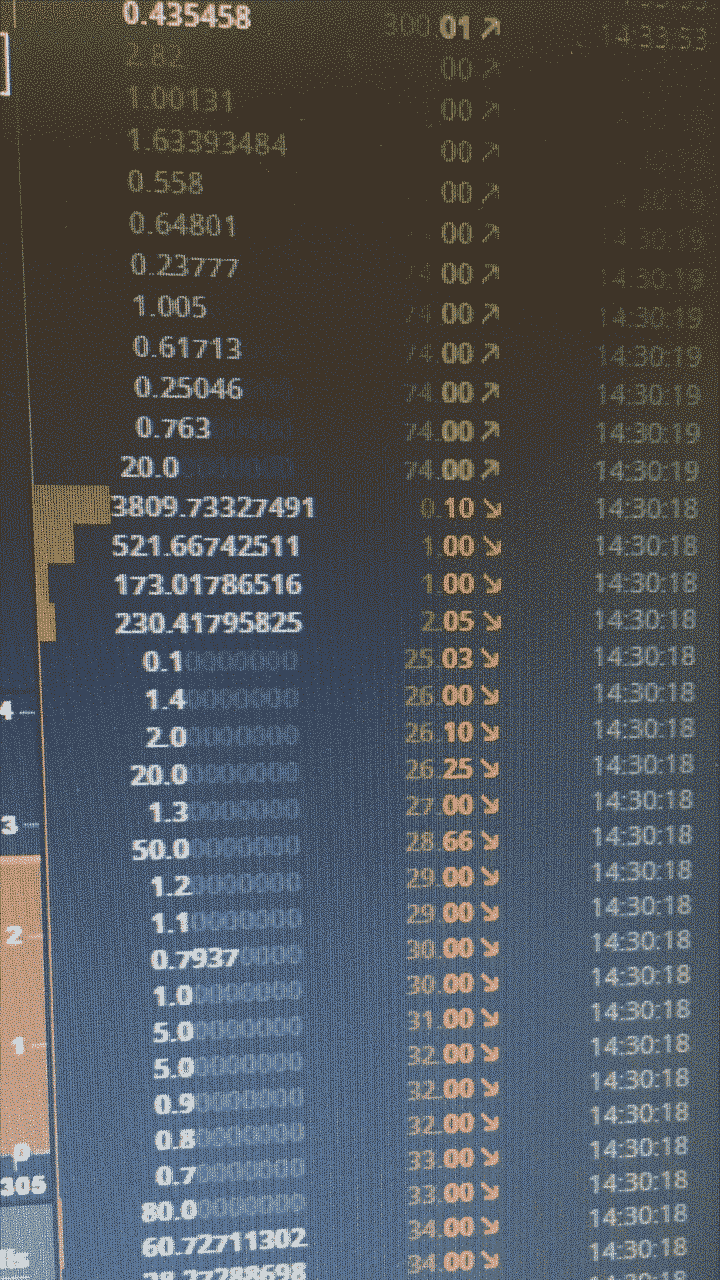 In June of 2017, Ethereum was trading at around $300, when suddenly a flash-crash happened, dropping the price to $0.1 – you saw it right, TEN cents! As it so happens, there were those smart enough to place low orders, even at $2 and $1, but a guy that hit a real jackpot bought 3809 ETH for $380. Three and a half minutes later, the price went back to $300, making this person 299,899.99% richer or, effectively, a millionaire. This incident was also limited to GDAX, run by Coinbase.

So far we’ve established that the human factor was the most probable cause for both flash-crashes. But as we mourn with those who mourn, the gargantuan improbability that the exact same thing would happen in the exact same place, twice in 18 months, still leaves room for one dreadful doubt: could it be that something is seriously wrong at the core of the Ethereum network? The answer is: it might likely be so, but it’s not what you think.

While neither Ethereum Foundation nor Coinbase has confirmed any „suspicious“ actions which might address stability and vulnerability of the Ethereum blockchain, a completely different type of problem might lead to an absurd situation in the nearby future: ETH might succeed beyond expectations, while the asset itself – the coin – might become worthless.

Let’s say you want to create a DApp. Every transaction on this DApp pays for gas in ETH. The „gas“ is just a different name for fees on the Ethereum network: if you imagine the network as a shared car, depending on how much you want to use it, you pay for gas more or less. However, there is a catch: an Ethereum contract does not specifically require gas! This means that, instead of paying for gas in ETH, which means dependency and risks that come with it, you could use your own DApp’s ERC-20 token, making it functionally independent of ETH. The community refers to this as „economic abstraction.“ 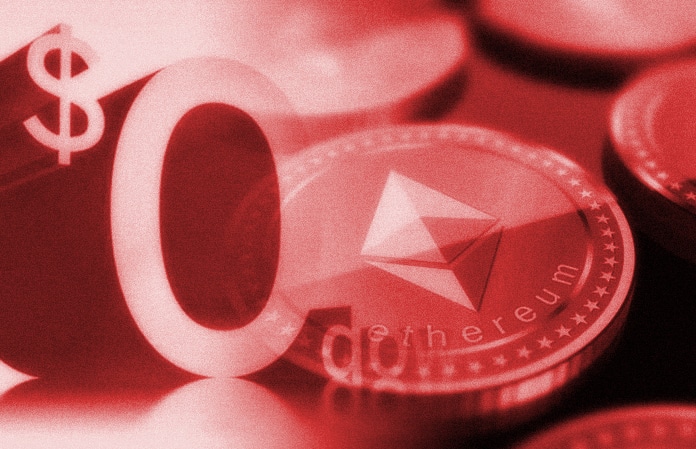 While the economic abstraction is a logical upgrade to the ETH essentials, there are many counter-arguments with some valid points. Without going into too many technical details, the two things that most investors would probably be interested in are the price of a token and the wallet software.

First of all, the current version of the software does not nearly support the full implementation of abstraction. It eventually might but at the cost of increased complexity for both portions of the code dealing with contacts and transactions, as well as the wallet software, which would have to manage balances for both ETH and the DApp tokens.

The market price of a token, or ETH for that matter, would be much more difficult to determine, as the software would have to take into consideration many different aspects of an ecosystem to create a unified perspective and calculate the correct price. This is extremely difficult to implement, yet it is required as miners need projections to calculate their profits against mining difficulty, hardware and electricity costs.

Suffice it to say, placing very low buy orders is probably a prudent thing to do. Of course, it is highly improbable that you’ll ever get ETH or BTC for $0.1 again, not to mention the questionable morality of getting rich off someone’s tragic mistake, but one of the basic principles of crypto trading is: if you won’t, someone else will. So, it might as well be you.

While extremely low buy orders are probably never going to get filled, setting the price reasonably low increases your chances dramatically. This, however, requires some special care, as crypto markets are still volatile and such orders might lead to situations in which your reasonably low orders abruptly become much higher than the current market price, decimating your portfolio. So, if you’re into crypto, always have a smartphone ready by your side and install one of the hundreds of apps which sound an alarm when things start going south.

The good news: the same rule can be applied to any trading pair, just letting you know, in case you have your own fears about ETH. The bad news, though: it is the same as rolling an apeirogonal prism, as this could happen to just about any trading pair, at any time, on any exchange.