Deal Can Be Reached Says Tsirpas

The never ending Greek drama will continue on Monday. Tsirpas is confident that deal can be reached in the emergency summit of European leaders.

The financial institutions led the Athens Stock Exchange index higher on Friday anticipating deal at the end of the week. The European Central Bank is determined to maintain a lifeline at its own emergency summit today. Last night outside the Greek Parliament in Athens thousand strong crowd assembled demanding the government to reach a deal and end the accelerating capital flight. 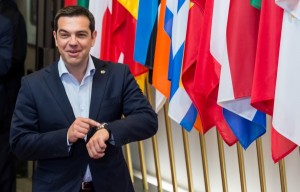 Tsirpas commented, the summit “is a positive development in a path toward a deal,” in an e-mailed statement from his office. “We aimed that final negotiations take place at the highest political level in Europe, and we are now working for the success of this summit. Those who bank on crisis and terror scenarios will be proven wrong.”

Greece is on the brink of default if its government is unable to reach a deal before its existing bailout agreement ends on June 30. Both parties are playing the chicken game regardless the prevailing optimism which followed the fruitless meeting of the finance ministers in Luxembourg.

Miranda Xafa, former Greek appointed to the IMF said, “Tsipras issued a dovish statement this morning, indicating that he will blink and come to an agreement. The Greek premier overplayed his hand, believing that Greece is systemic and therefore creditors would accept his demands for fear of contagion.”

Christine Lagarde, Managing Director of the International Monetary Fund is adamant about the bailout conditions said “The key emergency is to secure a dialog with adults in the room,” after listening to Greek Finance Minister Yanis Varoufakis in Luxembourg on Thursday. “What we lack is a dialogue.”

After the four hours closed meeting between Greece and the troika — the ECB, the IMF, and the European Commission — the standpoints are further apart than ever. Without a solution, the deterioration could lead to further massive capital flight from Greece and the departure from the currency bloc would become inevitable raising the cost of intervention.

Jeroen Dijsselbloem, the current euro-area finance chiefs after the closed meeting said: “The way it goes now we’re going in that direction”, answering the reporter’s question of the looming Greek departure from the euro area.

Greece still has 12 days left before the bailout window shuts but the need for some parliaments to sign off on any agreement means it’s already too late for them to access aid in time to pay the IMF about 1.5 billion euros ($1.7 billion) at the end of the month, according to Dijsselbloem.

“Let’s say that we do reach an agreement; it’s unthinkable that the implementation and then disbursement will also have to take place before the end of the month,” Dijsselbloem said. “That is simply impossible.”

Its About Merkel Time 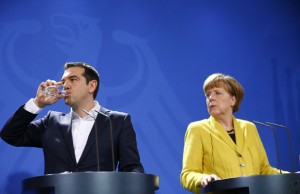 Greece’s government believes that the creditors are trying to squeeze out another paltry sum from the embattled Greek people. It might sound valid in election campaign in order to secure win, but the truth is that Europe has fed up with the never ending Greek issue and slowly loosing its patience. Everyone agrees that without further belt-tightening Greece’s fate is sealed.

To get at least some money, Greece will now look to extract an extension of its bailout agreement at a June 22 summit that will put Tsipras and Germany’s Angela Merkel, who has tried to smooth out tensions, in the same room. That EU meeting will start at 7 p.m. in Brussels.

Tsipras believes Greece will come out even stronger