Tsipras used up all the goodwill he had with Merkel’s legislators and the German public and the current Greek prime minister has great chance to follow his predecessor to the political abyss. 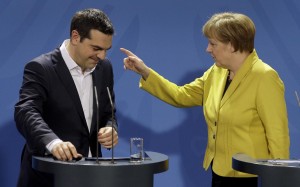 Merkel’s benevolence, who is leading Europe’s largest economy since 2005, is fundamental for debtor governments across the EU. Tsipras, however, made a U-turn last week and decided to go against the creditors demands by calling a vote on the German-lead austerity. His decision is bold but left him no chance to come out good from the referendum. If the Greeks vote “yes”, he has to accept the budget cuts as the cost of assistance from the creditors. If the outcome is “no”, Greece probably must leave the euro-zone.

“We are watching the end of the political career of Alexis Tsipras,” commented in Bloomberg Radio interview Jacob Kirkegaard, a senior fellow at Peterson Institute in Washington. “Mr. Tsipras can continue his career on T-shirts for students, replacing Che Guevara.”

Merkel is firm about his decision to cease further debt negotiations with Greece until the results of the referendum is known. The finance ministers of the euro-area repeated Merkel’s decision on a late Wednesday conference call.

“It’s the legitimate right of the Greeks to do that whenever they want, on whatever question and with whatever recommendation the government wants to give,” commented the referendum call Merkel in a speech to parliament. “But, to be clear, the other 18 euro member states have the same democratic legitimacy to duly take their position in response to the Greek decision.”

Berlusconi as prime minister has survived countless court cases and a tacky sex scandal in Italy but resigned after few days when senior lawmaker from Merkel’s Christian Democrats urged him to step down.

Papandreou had to learn the hard lesson too from Merkel when he called a bailout referendum the same year. Merkel urged him that the vote should focus on remaining an euro-area member — as Finance Minister Wolfgang Schaeuble recounted Wednesday in German parliament. The following unrest in Greece, and within his own socialist backyard, forced Papandreou to withdraw and the vote was dismissed.

“This is the historical truth,” Schaeuble said.

Tsipras political outlook depend on the result of the referendum on Sunday. His left-wing Syriza party is asking voters to refuse the austerity program for tax rises and spending cuts put on the table by euro-zone finance ministers.

A “no” vote could easily expel Greece from the euro-zone, a result that most Greeks want to escape. Tsipras’ train of thought is that “no” vote would result on better negotiating position and yield a better bailout deal.

A win for the “yes” site, backed by Greece’s main opposition parties and the rest of the euro-area leaders, would likely end Tsipras’ political ambitions.

Answering a Greek television interviewer’s question whether he would resign if the referendum turnout is “yes”, he answered, “I’m not attached to the chair.”

Merkel is facing criticism at home for allegedly interfering in other countries domestic policies. At least that is Gregor Gysi, parliamentary leader of Germany’s anti-capitalist Left party’s opinion. 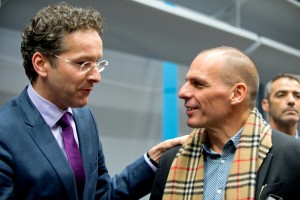 Dijsselbloem To Varoufakis: “You Just Killed The Troika”

“You want to get rid of the leftist government in Greece, that’s your goal,” Gysi said in a parliamentary debate. He cited Merkel’s refusal to engage in bailout negotiations before the Greek vote. “That’s the proof. It’s because you hope that the government will fall on Sunday,” he said.

The perspective from Athens mirrors a similar opinion.

“You may very well say that. I couldn’t possibly comment.”

***Warning*** On Sunday, the 5th of July, 2015 the Greek Bailout vote will take place. This is a major event which is expected to cause many adverse conditions in the market during the Monday Market Open, such as Price Gaps, Extreme Volatility, Low Liquidity and Widened Spreads. We strongly advise all traders to lower any unnecessary risk and keep your accounts well-funded in the event that you wish to keep any positions open over the upcoming weekend.

Surplus and rising appetite in the oil markets: lukewarm prospects