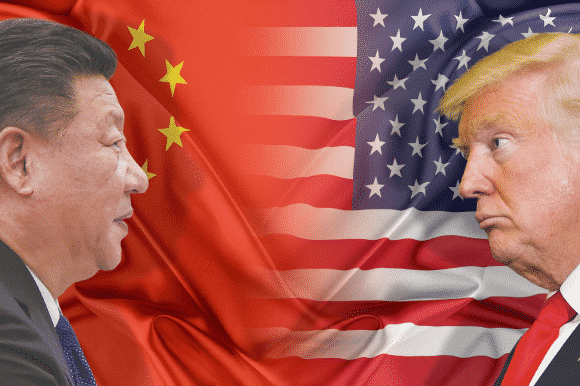 It‘s a well-known fact that China and the US have the strongest economies in the world – they both make about 36% percent of the world economy. As China grows, it, logically, has a larger share of the global economy. China‘s economic policy develops with a single goal – to reach and exceed the US‘ in order to overtake it. It wants to become the greatest economy without a competition. The Chinese economy is market driven, oriented towards services and consumption. As the largest trading nation, China causes tensions in the relationship with the US with its export-import surpluses. Although we are witnessing the intense US vs China match at the moment (Bejing vs Washington policy makers), their economies are very closely related. Moreover, their bilateral relationship is a key factor to global prospects.

But let‘s take a look at the custom history in the previous years between these two gigantic rivals. Also, why Trump wants to impose 40 % tax on imports from China. US‘ idea to raise tariffs on Chinese goods comes from the great disproportions in these countries‘ trade balance. China has been the greatest exporter to the US for a decade. Between 2007. and 2015. the trade surplus between these two countries increased from $ 29.8 to $ 266 billion. It automatically boosted the value added by the sales of Chinese goods in America. Of course, the US disliked this. Furthermore, they felt threatened and started introducing anti-dumping measures against China. Their idea was to give a blow to Chinese exports and to slow down its GDP growth rate The statistics say that the US deficit with China was 347 billion in 2016 – the imports from China exceeded the US exports to China. That‘s why the US policy wants to increase the US customs duty rates. The US import tax from China will control the import, especially of consumer electronics, clothing, and machinery. China produces consumer goods at the lowest prices, due to their standard of living and the exchange rate. That’s why the US companies can‘t compete with China‘s low costs. China‘s export in the US implemented trade protectionism and high taxes, in order to bring jobs back in the US. With 40 % tariff, Trump promises to lower the trade deficit with China and force it to strengthen their currency against the dollar. He also claims that China undervalued their currency on purpose.

Is the trading war inevitable and will the negotiation offers move towards further trade and investment?

Xi Jinping shows no interest in trade war saying that wars emerge no winners! But Trump‘s language is not toning down – He accuses China of unfair trade practices. If the accusations continue, as a response, China will impose tariffs on the US goods (this already happened in the past). These tariffs could especially affect the US airplane industry, the car industry and the production of soybeans. The experts say that China will surely retaliate if Trump imposes the tariffs. Otherwise, this condition will severely hurt the US economy. Will China be the loser in this potential trading war and how will the high tariff rates affect Forex market?

China‘s foreign exchange reserves increased in February as pressure on yuan apparently calmed. The statistics show, until this moment, the months of declines in China‘s forex reserves. They must defend the devalvation of yuan due to capital outflows. In the last couple of months, Beijing has issued new measures to restrict irrational spending abroad, especially on football teams, and luxury. The stabilization will positively affect the trade tensions with the new US administration. This is the first increase in reserves since June 2016. The dollar against non-dollar currencies rose in February, but the prices of assets in which China invested are up! This increase, though, does not reflect in capital inflows. They are still facing capital restrictions due to high yuan interest rates. The Bank of China officials reports that they‘ll stick to their established exchange rate framework to maintain the currency stable. However, tightening capital controls to prevent capital outflows may discourage foreign direct investment flows.

The consequences of US vs China trade war

Since Trump has withdrawn the US from Trans-Pacific Partnership, his action will badly reflect on China due to a low support of free trade. China is very dependent on exports, especially those directed towards the US. Insufficient returns from free trade, however, will additionally disturb their weakened economy. Such an unenviable position increases the chances of civil unrest within the country. On the other hand, Trump‘s actions show dissatisfaction with globalization. The dissatisfying mood can be felt all over the world, but with Trump‘s victory, it’s also moving to America. Balance free trade was beneficial for the US economy, but the profit wasn’t equally distributed. In addition, it has brought unfavorable changes to the US social structures.
If China doesn‘t accept changes dictated by the US, that will aggravate the relationship between the two countries. In addition, it will eventually lead to a trade war and money loss. China cannot interrupt production access in the long run, while the US can simply get back to Trans-Pacific Partnership if necessary.

The US should also adapt to Sino-American trade in order to protect the important economic relationship with China and avoid considerable costs among American consumers. In addition, no change in global trade will return manufacturing jobs in the US.

This preview of issues suggests an unavoidable international institutional and economic changes. The US believed that liberal international trade will undoubtedly bring only benefits. China, otherwise, believed that global trade will bring prosperity to their country without any change in their domestic political system. They both got what they wanted, but trade inevitably changed them. They both must be fully aware of the imposed pressures and negotiate in a good faith in order to avoid the catastrophe. Although the stakes are high, they must try to peacefully resolve the conflict in order to maintain good future cooperation. But if their negotiations fail, the dispute will seriously endanger their future prospects and many countries would be gravely affected.