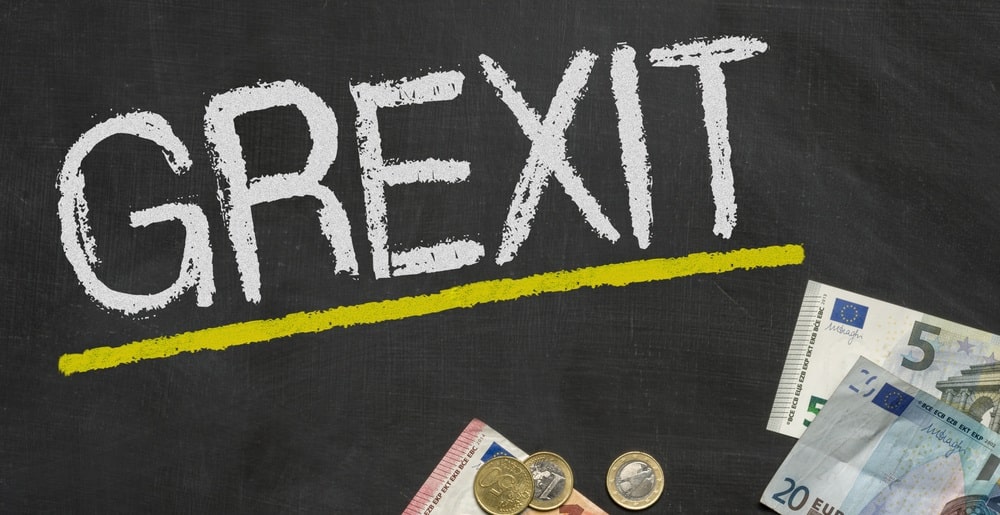 Greece has always had a difficult time with the finances, economic wreckage, and political divisions – from the WW II to the recent history. In the 90‘s it encountered huge budget deficits with the drachma as the main currency and joined the euro in 2001. The following period (2001- 2007.) was the period of growth and stability since Greece profited off the cheap loans from the EU. In 2008, the Eurozone experienced the financial crash and all the EU members were seriously affected, including Greece. But Greece couldn’t rise as it did many times before since the euro was controlled by ECB (European Central Bank).

In 2010 IMF and EC started giving Greece loans in exchange for increased taxes and budget cuts. But agreement reflected very badly on the Greek economy and Greece ended with the debt of roughly € 110 billion. On one hand, leaving the Eurozone could secure the country financial autonomy. The Eurozone would be better off without Greece constantly in need of financial support. On the other hand, European leaders want to avoid a new Greek crisis with Brexit. However, they need to help Greece with migration crisis that has been concentrated in the Aegean sea.

In 2015. the Troika forced Greece to accept another round of restrictions. Otherwise, they will collect € 50 billion through privatization fund and many reversal laws that would ease the financial crisis. In return, they would receive a € 86 billion bailout. Economic experts, on the other hand, call out for Grexit, the potential exit of Greece from the Eurozone. After the initial shock, will the consequences turn positive? Will leaving the euro enable regrowth and economic improvement? This complex issue must be observed from all posssible, different angles, so let‘s face it! – With Grexit 2017. Greece will regain sovereignty. At this point, the Greek government has lost control over its economic policy. If it stays in the EU it will have to face the painful consequences – budget cuts and no monetary flexibility, not solving the debt issue. With the control of monetary policy, they could solve the issue of inflation and unemployment. The new drachma could stimulate weakened tourism industry and would endure budget cuts and increase GDP in in the future.

– A Debt relief is not possible in Eurozone. A substantial cut in debt would happen if they give up membership in the EU. If Grexit happens ECB will protect the devaluation of the new currency.

– With the exit, Greece will almost certainly encounter an immediate hyperinflation. They would have to print the new currency, and the inflation could reach the double digits. It could lead to the increase of the costs of living and the long lasting recession. Managing the crash of the monetary union needs a serious expertise.

-The political unrest can badly influence tourism industry and reflect negatively on the Greek economy. The political tensions could lead to new elections and the unresolved consequences.

The debt-stricken Greece is still fighting to avoid bankruptcy.

Dealing with draconian conditions imposed with the latest bailout. The creditors insist that Greece has to continue with the reforms in order to receive money from the bailout program. Greece is running out of cash and the timing couldn‘t be worse with all the upcoming elections in Netherlands, Germany and France and the Brexit negotiations. If it cannot make repayments it will default on its debt. The IMF has invited Greece to make changes in the labor market, and Greek Prime Minister Tsipras insists on debt relief before any further concessions take place.

The unemployment in Greece will exceed 21% in 2017, and the investments will drop below 60%. If European creditors refuse to support Greece, their debt will be out of control, so they will have to abandon the euro to get out of the crisis. Potential elections in Greece could result in exit talks from the EU. The present coalition succeeded to worsen the country‘s prospects due to lousy negotiation tactics and the refusal to convey reforms they previously agreed upon. With their bad implementation, the outcome was not satisfactory neither for Greece economy nor the investors. They have encountered slow privatization, stumbling deregulation. The state of the health, education and justice systems has never been worse. If the negotiations drag on, Greece may require further assistance by the end of 2017, and the patience for Greece has gradually diminished.

Along with facing financial collapse, Greece continued to experience another crisis. It was threatened to be expelled from Schengen area. Greece is a transit country for asylum seekers on their way to their intended destinations. About 35 000 migrants reached Greece from Turkey overseas at the beginning of 2016. EU government is desperate due to the increasing number of arrivals. They suggested to kick out Greece out of the Schengen area, at least temporarily, in order to avoid the dissolution of the union. This possible suspension, though, will not halt refugees and it’s possible that the humanitarian crisis escalates in northern Greece. Any border closure will lead to more people being stranded, increasing the chances of violence and unsafe channels to move further to European countries. Greece should remain within the Schengen area and mustn‘t bear the weight of the migrints‘ crisis alone. but it should state clearly what additional support they need from EU.

Greece‘s future is on the knife-edge, and according to the WTTC, impact on tourism industry will considerably affect Greek economy. Leaving the euro will make all exports, including tourism, much cheaper, so the tourism industry will experience a boost. On the other hand, imports will become more expensive with the new currency and the standard of living will considerably drop. The economic disturbance may put off tourists until the country stabilizes. Is Greece staying in EU?

Grexit will inflict pain to Greek economy. It will experience a huge devaluation, explosion of public debt, and will seriously shake its confidence. If it decides to leave EU the possible results will be discontent and political instability. Will a fresh election be an answer to regaining power before the crisis gets out of hand? Regardless of the election results, the country will surely face a set of formidable political and economic challenges that will greatly affect their position in Europe.

If Greece decides to stay in EU, the banks will collapse and they will not have access to essential imports (gasoline, medicine, food). The economic crisis can turn to a humanitarian! If they decide leave the Eurozone, they should not rely on the support of ECB providing emergency liquidity, so they would be forced to introduce a parallel currency.

If Greece decides to go, the future currency is far from certain. Greek banks will remain closed and creditors have confirmed that they will not propose a new bailout. European commission and ECB must make a thorough analysis to see how a new Greek aid request will affect the stability of the Eurozone. Over the past few years, the Greece debate is about preserving their membership and protecting the currency. But now the leaders consider Greece as an entity that has a strategic and cultural significance for Europe. On the other hand, Greeks are worried too because they would have to choose between the order and the chaos!

To conclude, in this tough Greek vs EU play-off, both teams have rights and wrongs on their side. But one thing is clear: there are no fundamental political changes without long-term guarantees.

How the Greeks will vote and what will follow? However they vote, it‘s likely that they will face austerity either way! Without the EU financial help the money in banks will drain.The isolation inside their own hideaway will not be a good thing. If there‘s even a little hope, the austerity will suck out all the corruption and lead to transparency in their system; only then the real reformation will be possible. The Greek problem is not simple at all. It‘s not only a matter of currency and the Eurozone, it’s also a geopolitical matter that has to be approached wisely! Dramatic decisions can bring only troubles! Both EU and Greece should learn to negotiate with incentives, not threats if they want to envisage the horizon of hope!