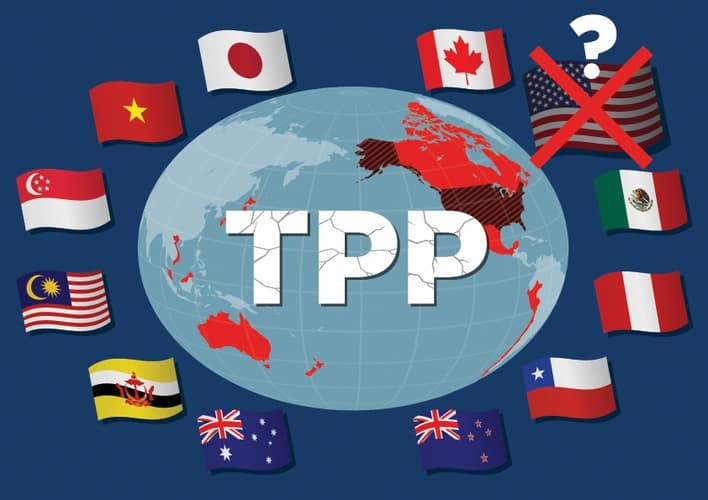 Japanese officials and economic experts have been very concerned with Trump‘s approach to foreign policy, and the way it might affect their economy. Trump’s decision to withdraw from Transpacific partnership has definitely disturbed a massive free trade pact that contained 40% of the total world economy. However, the Japanese officials plan to bring the trade pact back, not wanting to lose their exports and investments. Their plan is to keep going with PPT without the US since the other member countries have been working for years to create and manage the world’s largest trade pact. Japanese Prime Minister Shinzo Abe thinks that it would not be a smart idea to leave everything behind, cause there could be attained more useful economic ties with, for example, medium-sized markets in Australia or Vietnam. He also underlines the importance of access to Asian markets in order to bring the Japanese economy back to life. Moreover, TPP offers an alternative to RCEP, less strict trade pact, for ASEAN. Revived TPP may restrict Chinese domination in economic relations with neighbors and Japan will still have benefits from its largest trading partner.

The importance of relationship between Japanese and Chinese economies

Japan and China are the largest trading partners in the world with about $350 billion annual revenue through goods and services. When Japan wanted to get out of the economic rut, it turned to China. China has always been interested in Japanese outstanding expertise related to cars, machinery, and electronics, so the import of industrial goods definitely strengthened Chinese – Japanese ties through improving the industrial infrastructure. Since China has the population that is the greatest in the world, Japan is naturally very interested in exporting goods and services to Chinese booming class consumers.

Japan is especially interested in building car factories, making their goods directly overseas since this kind of economic policy reduces cost in the Chinese market, making the prices for the Chinese consumers reasonable and the yen stable. Another beneficial fact for the strong ties between the two countries is their vicinity. Due to this fact, Japan has always been able to customize products to the taste of Chinese consumers. Statistics show that Japan is Chinese’s greatest trading partner. Having the two largest economies in the world, Beijing – Tokyo relationships must be mutually supported, for the best economic growth results!

The importance of free trade zone between China, Japan, and South Korea

China, Japan, and South Korea are three Asian countries that make together 90% of East Asian GDP, 20 % of global GDP. In order to improve the external trade environment, China should facilitate the tariff reduction and access to a preferable market. All three economies are more than complementary and they can only gain benefits from this shared market. By facilitating the passage of RCEP, the entire region‘s economy will nothing but flourish. Japan and other countries must learn from the history of European integration and understand that the economic goals should overshadow the political and that they should build their political trust on firm economic ground. This also means that China should share its leading position with Japan, and they should all overcome the historical disputes they had in the past. Their agreement should inspire further the integration of Japanese and Asian economy that would definitely have a global impact along with Chinese ‚one belt one road‘ project! The US withdrawal effect on Japanese forex market

After Trump signed the withdrawal from the Trans-Pacific Partnership, Japanese stocks declined. The US withdrawal from the pact, by all means, discouraged the investors from both sides of Pacific. The Forex market shows that the yen weighed on exporters and the financial shares decreased. Leaving TPP has not surprised forex investors since Trump has been talking about it even before becoming the president. But the introduction of substantial border tax has made forex investors get the cold feet.

The implementation of the trade agreement takes about 40% of global trade, so it will, by all means, affect the currency markets of all countries in the world, not only the TPP members. It could boost the flow of goods and services. Moreover, changes in export will provoke the changes in trade balances that will definitely influence the state of the Forex market and the countries‘ currencies. The member countries exports are believed to rise by 30% by the year 2030. Imports might neutralize the expanded trade’s results, and more investment and revenue may be boosted by closely integrated trade relations.

Forex predictions show that Japan might be the greatest beneficiary of the agreement. That is because the US is already their important trading partner, and, as we already said, it would benefit from the Asian region as well. Its export is expected to rise by more than 20%, and GDP by 2%, if the TPP approves. These overall beneficiaries will influence the strengthening of yen. Future discussions between Japan and the US must be based on an honorable relationship with both leaders. But Japan has to think of itself as being the most important. Japanese has no choice but to change course. They must revive the economic power, and along with the US, to concentrate on the mutual goal – to become super powers. As far as the Asian market is concerned it has to make the most of the good relationships it nurtured with China and the free trade zone agreement countries. The entire world, not only Japan must recognize the importance of the liberalization of trade. The negotiations may be difficult, but they are necessary for a better future trade scheme. Japan should commit to extending free and fair economy zone with those nations that highly value freedom, democracy, and respect for human rights, cause economic prosperity depends on security. Japan is expected to strengthen the ties with other TTP countries, sharing the same values, in order to contribute to the stabilization of the zone.The same thing goes for the Asian economies‘ partnership – their bonds must be fair, benefiting and reciprocal for good economic and security cooperation.