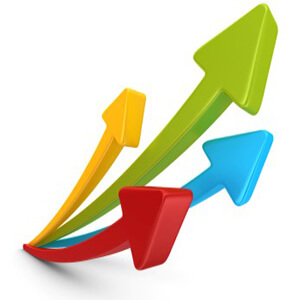 In this section we are going to speak about some of the most commonly used forex indicators.

Some of the more experienced traders just watch simple charts, with no indicators, using Price Action to predict future movements of a currency pair. This is the much talked about “chart reading”. Unfortunately, not all traders can do that with high accuracy so a little help is needed. That help can come from forex indicators.

Every trader must have a good understanding of forex indicators, how they work and how they can help us in achieving our goal, so let’s get to work.

They are called leading forex indicators, because they can give us an early warning of price reversing by using the overbought and oversold levels.

Some of the most widely used Oscillators are RSI (Relative Strength Index) and Stochastic Oscillator.

The RSI ranges from 0 to 100 in an attempt to identify overbought and oversold levels.

Rising values of the RSI indicate that prices are rising and the buyers are in control of the market. However, a value of the RSI greater than 70 is indicative that the currency pair reached overbought territory and a retracement, consolidation or even a trend reversal is likely to come.

Falling values of the RSI indicate that prices are falling and the sellers are in control of the market. However, a value of the RSI lower than 30 is indicative that the currency pair reached oversold territory and a retracement, consolidation or even a trend reversal is likely to come.

The best place to sell a currency pair is when RSI crossed the 70 level upwards, thus reaching overbought territory and then crossed it downwards from above, heading for lower prices.

The picture below will help you to better understand:

Opposite applies to buying a currency, but the 30 level must be taken into consideration (oversold).

The 50 value of the RSI can also be used to help identify a trend. If the trader thinks, based on other factors that a trend is starting, RSI can be used as a confirmation when it crosses the 50 value.

One of the most powerful uses of the RSI is for showing Divergence. This is a characteristic of all the Oscillators.

Given that Divergence is such a powerful tool, we will dedicate another section for explaining it in detail.

The default period of the RSI is 14. A smaller value will give you a faster RSI (but false signals are more likely to appear), while a greater value, will slow it down, giving you less signals. Every trader must find the setting that best suits him/her.

Our recommendation is to use the default value until you become more accustomed to it and feel the need to change its period.

Like all oscillators, RSI gives better signals in ranging markets, but in a strong trend, it can easily fail so it must never be used as a trade signal on its own, but rather in conjunction with other factors, to help the trader define the direction of his next trade.

Similar to the RSI, Stochastic ranges from 0 to 100 and identifies overbought and oversold levels. It also uses two levels, but those are 20 (for oversold) and 80 (for overbought). Just like in the case of RSI, one should buy in oversold territory and sell in overbought. Opposite applies to buying a currency, but the 20 level must be taken into consideration (oversold).

The Stochastic settings differ from trader to trader. Just like in the case of the RSI, a smaller value will give you a faster Stochastic (but false signals are more likely to appear), while a greater value, will slow it down, giving you less signals. Every trader must find the settings that best suit him/her. In case you are not sure what settings to use, just use the default ones.

Like all oscillators, Stochastic gives better signals in ranging markets, but in a strong trend, it can easily fail so it must never be used as a trade signal on its own, but rather in conjunction with other factors, to help the trader define the direction of his next trade.

As we all know, “The trend is our friend”. But how to find it and most of all, how to find it before it’s already gone? Unfortunately, I don’t have an exact answer to the big question, but I can give you a couple of helpers: the MACD and the Moving Averages. Next, we are going to cover the basics for these two forex indicators.

Because it is not an oscillator, MACD has no range from 0 to 100 like the RSI and Stochastic and it is composed of two moving averages (a faster moving average and a slower one) and a histogram.

The histogram shows the difference between the two moving averages. It will get bigger when the two lines diverge and smaller when they converge.

MACD is a good momentum indicator and gives the trader a view on the power of a move: when the two lines diverge (and consequently the histogram gets bigger), it indicates that the move in price is strong. Eventually, the two lines will start approaching (converging) again and the histogram will get smaller, indicating that the move is close to being over, a retracement is coming or an opposite move will start soon.

The picture bellow will help you to better understand: The default setting for the MACD is 12, 26, 9, but those can be adjusted to give you a faster MACD or a slower, smoother one.

The big drawdown of the MACD is that it lags behind price due to the fact that it is formed of two moving averages, which are lagging by nature. Despite this, it is a great tool, used by many traders.

You can use the MACD as standalone forex indicators, but it is not advisable to have just one reason to enter a trade, or rely on just one indicator.

Their most common use is for showing a trader the main direction of price, help him/her to predict future price movement and offering dynamic Support and Resistance.

The smaller the period it is calculated from, the choppier the MA will be. For example, a 5 MA will follow the movement of the price closer than a 100 MA, being always (or most of the time) inside the price bars and not being of much help. On the other side, MA 100 will better show price direction and will offer dynamic Support and Resistance.

There are different types of MA’s, each one with different calculations to smooth the price movement. Here are two of the most important ones: Simple Moving Average (SMA), and Exponential Moving Average (EMA) . There are some more exotic MA’s, but there is no need to go in that territory just now, so let’s cover the basics first.

The SMA is calculated by using the closing price. The formula is simple, but of little importance now, because all charting platforms will calculate forex indicators automatically and draw it on the chart.

The EMA will give more credit to the last bars in the forex indicators calculation (the most recent), thus giving us a better representation of where price is going because we can better see what the traders have been doing lately rather than at the beginning of the MA period that is used for calculation.

Differences between the two types of MA’s:

In the calculation of the SMA, the prices from all the bars are treated the same.

In the calculation of the EMA, more importance is given to the prices of the last bars.

In the picture below, you can see the difference between the two types of MAs: The red line is the SMA and the white line is the EMA. Both of them use a 50 period for calculation, but as we can see, the EMA is closer to price than the SMA. If price will drop, EMA will turn down with the price faster than the SMA, thus telling us faster that price is going down.

However, if the move down would be a fake one and price would start rising rapidly the SMA would be the better choice for us, because it would be less affected by the fake move.

As you can see, every MA has its advantages and disadvantages and this is the reason why every trader must find his/hers type of MA and custom period for it. Generally, shorter period MAs are more useful in higher timeframes while longer period MAs are better suited for smaller timeframes. You don’t have to understand from this last statement that a short period MA cannot be used in a small timeframe like M15, just that on a Daily chart, price will respect it more and will find more often Support or Resistance in its vicinity.

There are different strategies where MAs play an important role, but that will be discussed later on, because we have to learn to walk with forex indicators before we can run.

Find some more information about forex indicators in the following guide.