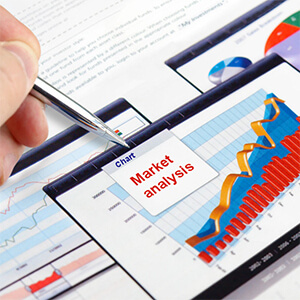 When trading Forex, the way of making money is by predicting with a high probability where price will go and trading accordingly. Price can do just three things: go up, go down or go sideways. In predicting the direction of price, traders use three types of analysis: technical analysis, fundamental analysis and market sentiment.

The main principle behind technical analysis is that history repeats itself, thus a trader can look back at price action and make trading decisions based on what happened in the past in a similar situation. If a level of support held in the past, when price comes close or touches it, traders will watch it closely and base their trading decisions on the way price reacts when it touches the support.

Whenever you hear the term technical analysis, a chart comes to mind because charts are the best way to represent price action. The most common type of chart is a candle chart or a bar chart. On a chart you can draw trend lines, levels of support and resistance, channels and you can use indicators.

Technical analysis is a very important tool for a trader, but it can take years to master and to find the right amount of analysis that needs to be done. What I am trying to say is that some traders tend to over analyze the charts and fill them with all the indicators they can find. In this case, more is not necessarily better, as you won’t get better results just by adding another indicator to filter out bad signals from the previous one. When using technical analysis, try to keep it simple.

Technical analysis uses chart patterns and horizontal support and resistance and these are like I said in an earlier article, flawed by subjectivity. Two traders can draw a trend line differently, see a horizontal level a few pips higher or lower, or use a different period moving average. Because all these tools are part of it, technical analysis is subjective too, so different traders will have a different opinion on where they think price will go.

Fundamental analysis is helping us predict price movement by looking at the relationship between a currency and its country’s economical and political situation. In other words, if a country is performing poorly, their currency will probably drop on the charts. Upcoming political, economic and social news can greatly affect the movement of a currency pair.

When using fundamental analysis, because in Forex you trade a currency pair, you have to look at both currencies. If one of the currencies in the pair becomes stronger due to just released good news, you have to analyze the status of the other currency. If that one also has good news, the balance between the two will not change much so maybe you won’t see big movements on the charts. On the other hand, if one of the currencies has good news and the other one, bad news, probably you will see a big move on the charts in favor of the first one.

Be very careful when using fundamental analysis because when good news it released, the currency will not necessarily move up. Sometimes, even if the news is good, it has no power to move price because the overall situation of that country is poor. You must take into consideration several factors when you make a trading decision, not just news.

This is the general way that traders see the market. Each trader has his own opinion on the market and this point of view is expressed and shown by the position they take. All the traders around the world help shape the sentiment of the market by holding a short or a long position.

As a trader, you must take into consideration technical analysis, fundamental analysis and market sentiment and you cannot rely on just one type of analysis. If you have strong technical signals that price will go up, but general sentiment is down and the upcoming news have a bad expectation for that currency, you might want to review your position.