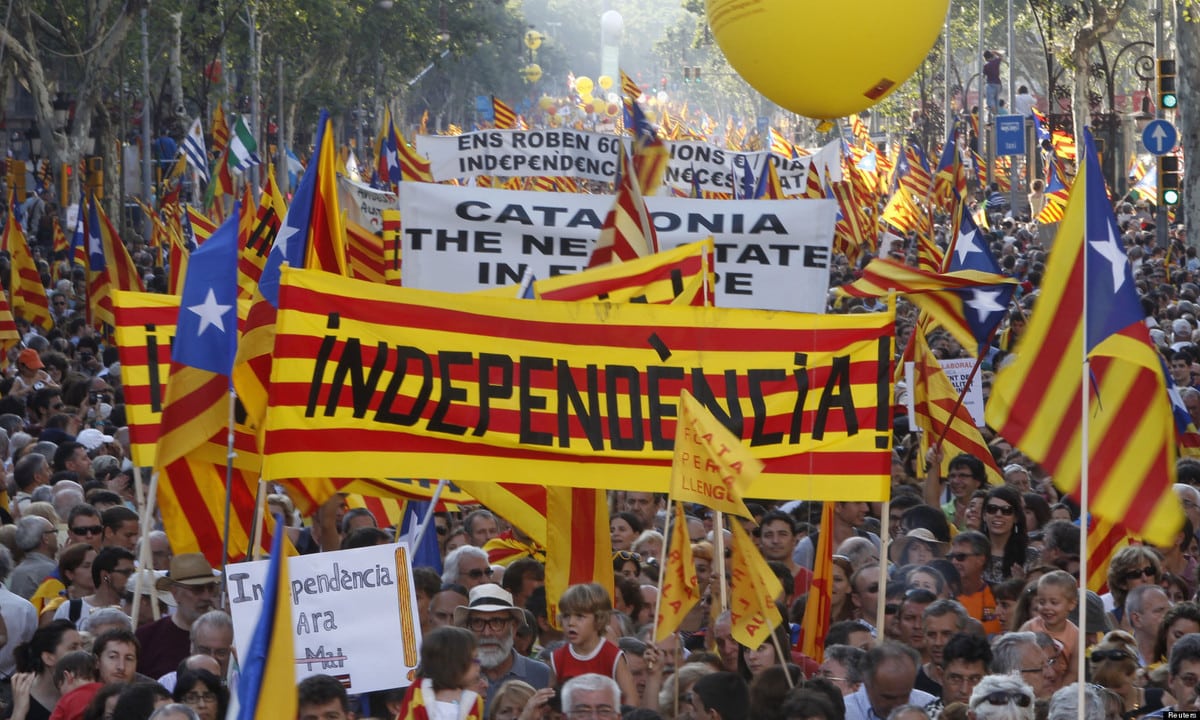 The political and economic situation in Catalonia 2017 is currently very complex. Although the fight for Catalonia independence is ongoing, Spanish government warns that this division will have a negative impact on Catalan economy and especially unemployment, believing that they will become at least 30% poorer and the unemployment rate will double. Spanish high officials believe that leaving a eurozone country directly implies departing from the EU trade agreements and losing euro as a currency and creating another one. Will the devaluation of the euro, as they predict, create a high inflation rate? The referendum in Catalonia in 2017 was held on October 1st, and it brought many controversies.

Why do Catalans want independence?

Catalonia was once an independent region on the Iberian peninsula having its own customs, laws, and language and was so until 1715, until the birth of modern-day Spain. Catalans’ wish to separate has never ended, and with much strife, they won the autonomy within the state in 1977. However, the wish for total independence escalated in June 2010, since the Spanish government decided that there was no legal base to recognize Catalonia as an independent nation from Spain. However, on October 1st, 2017. Catalonia‘s government came up with a referendum to leave Spain, and the Spanish government rejected the vote as illegal. The results showed that 90% of Catalans support the independence or more than 2 million people, but hundreds of voters were injured during the police intervention to stop the referendum from happening and streams of protesters went to the streets to demonstrate against the violence and the repression. There was issued a decree from Spanish government as an apology and help for companies to move from Catalonia. One of the biggest banks Sabadell Bank is getting out from Barcelona in 2017 since the political crisis has plunged the most productive region in Spain into uncertainty and numerous risks for business and economy have occurred. Before the referendum, Catalan economy was considered to be very strong, comprising one-fifth of the Spanish GDP, and equaling the size of Portugal’s GDP. It was viewed as ‘Denmark’ of Spain, internalized with strong institutions. It was growing at the faster rate than other regions of Spain with 25% of the country‘s exports. Also, Catalonia contributed in taxes, attracted investment (1/3 of important foreign companies are located in Barcelona), and they believed that with the economic balance they would supply Catalonia with growth and surplus. Job statistics and percentage figures show that the unemployment rate and inequality have been lower in Catalonia (13.2% in comparison to the 17.2% of the whole country), and that Catalonia overall is very important for the development of Spain‘s economy

Catalonia economic growth is mostly based on longstanding industrial tradition, and it accounts for the largest regional number. It‘s very attractive for foreign investment (especially greenfield investment) receiving $43 billion of the capital. Foreign investments have been directed towards pharmaceuticals, chemicals, transport, automotive sectors, which directly affected the labor market and the creation of new jobs. Catalonia also has good educational institutions, and hand in hand with favorable business climate, it has shown great results in educational achievements.

Separation will create a huge economic hole in both countries. A new border will, by all means, negatively influence the business climate and Catalonia unemployment rate in 2017 if they separate. As no longer being a part of the EU, it will influence the export, and it accounts for 25% of the total country‘s export. It would have to reapply for the EU membership and the reaccess might last for years. If the split happens, it will cause a considerable political and economic earthquake that will leave serious consequences. Business insider says that the immediate consequences of separation would imply a quick gain of about 16 billion euros for Catalonia and 2 % loss of Spanish GDP yearly. On the other hand, Catalonia’s 35.5 % of export is directed towards Spanish market, and it will also cost them dearly to create new regulatory structures such as banks and embassies. Another issue, that the separation will determine, is the situation with the public debt. According to central bank statistics, it amounts to $ 1.18 trillion, of which Catalonia accounts for 16.34% of the total debt, and this is not a minor problem. And again, with the loss of Catalan tax revenues, it will cause an irreparable harm to the Spanish economy.

How the referendum affects the forest market?

After the referendum, Catalonia has been changing the euro value of Forex – the euro has become cheaper in comparison to the US dollar as expected. The markets continue to be concerned because of the eurozone’s economic stability. Catalonia could face an economic crisis due to its separation from the euro, and the increased tariffs. The nationalists are ready to pay any price for independence, even if that would mean the economic instability. So the current situation on the Forex market is that the euro has slipped and it will keep lingering on the slippery road as long as the investors closely monitor the aftermath of the political situation in Spain. The current state suggests that there is a mediation going on between the Spanish officials and the Catalan president, and the EU calls for calm dialogue, but we’ll see what will happen next. The solution to this burning issue of separation should start with a national dialogue, but the chances that the negotiations start spontaneously are very low. Fierce nationalist sentiments and massive demonstrations cause civic violence and it will take time, months, even years for the sentiments to calm down. For that reason, international intervention is necessary and the Spanish socialist party should be encouraged to speak in the favor of democratic dialogue. The dialogue should discuss different, possible relationships between the central government and Catalonia, in order to come up with the idea for the constitutional reform. Meanwhile, both governments should work on reversing political and economic policies that will stop brutalizing the working class and the most vulnerable classes of their population in order to prevent further undermining of Spanish democracy.